Michael Hayes has won Employee of the Month for June. This is the second time this year that Michael has taken the title – a fantastic achievement!

Michael is Alltruck2’s very own HGV Valeter and Yard Man, although he does also help out Alltruck plc’s Rental team with their vehicles when required. 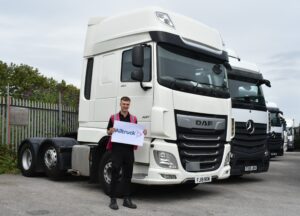 This is a huge support for the Rental team, especially during these unusual times when our workforce has been limited, with many of our members of staff still on furlough.

Clem, our Rental Desk Operator, says: “Every time I ring [Michael] for something, he is always very positive and happy to do whatever I ask of him, no matter what it is or which yard he’s got to come to he’s more than happy to help. I always feel confident that if I’ve asked him to do anything for me, it will get done and with the utmost quality and standards.”

Michael has been part of the Alltruck family since October 2019. His main job with Alltruck2 is to take all the vehicles that come off the fleet and spruce them up ready for their new homes. He also shows Alltruck2 customers around the used trucks and vans and keeps the yard as organised as possible – which is easier said than done in a busy depot!

Guy, our new Head of Alltruck2, has been thrilled with Michael’s work, stating “Michael has been a fantastic help to Alltruck2 with regards to always going that extra mile with a fantastic positive attitude. He’s worked closely with Hannah Sowerby-Hill [Marketing Executive] enabling her to take pictures of the stock.” 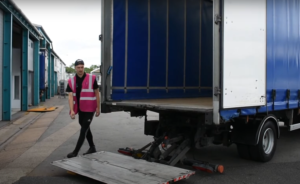 He continues, “I’ve had brilliant feedback from two customers. Richard Tomlinson from View Asset Management, and Stan Williamson from Williamson Commercials. They stated how helpful he was when they came to collect their purchases, and both said that [Michael] was a credit to Alltruck plc.”

Richard went out of his way to write a lovely email into Guy stating that “one person especially stood out” to him in his short time dealing with Guy’s team.

The email continues, with Richard stating that “everyone is helpful, smiling and always seem to have a can-do attitude. The one that has certainly stood out with these attributes more than most is Michael. He is young, smart, attentive, conscientious, polite, helpful and all that with a smile. This young man has potential that if nurtured correctly and driven could be an even bigger asset to your business than he already is.”

Prior to working for Alltruck, Michael was a bartender at a couple of local pubs and bars in Nottingham, and he also did an apprenticeship where he taught curriculum PE to school kids and held after-school sports clubs. His aspirations are to grow within the company and move into either a Workshop or Sales role.

Like many of our staff, Michael was furloughed for nine weeks during the pandemic, but he was excited to get back to work and back to the team spirit of Alltruck. He notes that his favourite thing about working for Alltruck is the positive atmosphere and the friendships he’s made, which keeps his morale high.

As a reward for winning Employee of the Month, Michael receives £125 to donate to a charity of his choice.

Michael chose to donate his money to the Royal Papworth Hospital Charity in memory of his grandmother who sadly passed away earlier this month. He enthuses about the wonderful care they gave her over the past year. 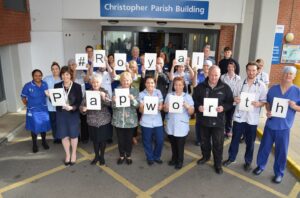 Royal Papworth Hospital treats some of the most life-threatening conditions within the NHS and the Royal Papworth Charity aims to bridge the gap between NHS funding and the reality of providing outstanding care in a state-of-the-art building pushing the boundaries of cardiothoracic treatment.

With the help of the donations they receive, the Royal Papworth Charity helps to ensure the very best facilities, services and equipment is available for the hospital’s patients and their staff.

You can help support Michael’s chosen charity by donating here.

HAVE A QUESTION? TALK TO A SPECIALIST